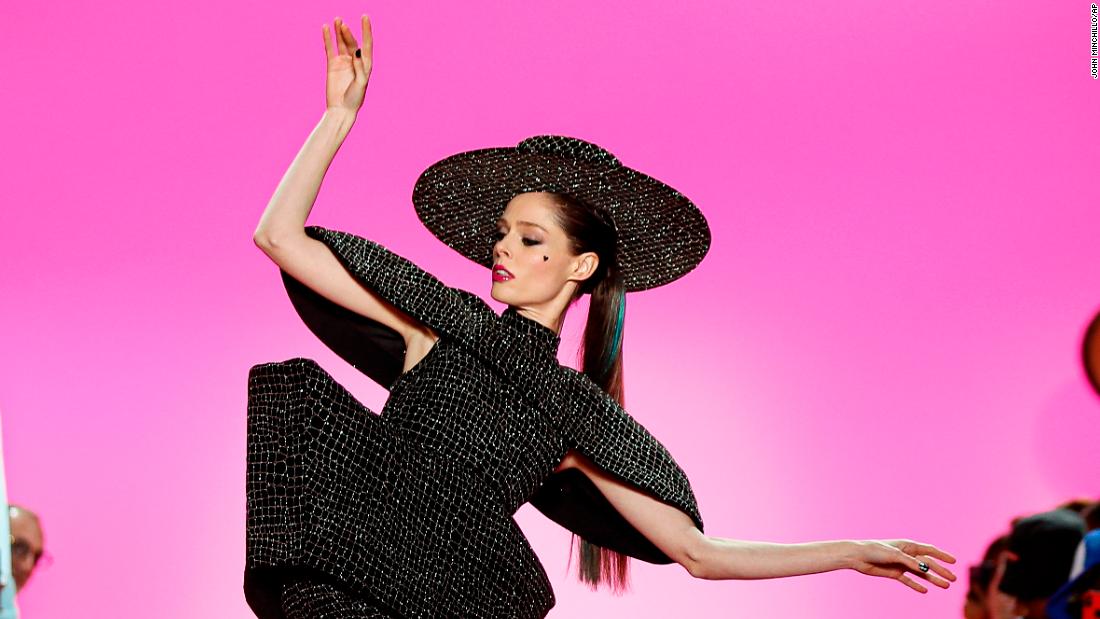 It's no secret that the buzz surrounding New York Fashion Week has slowed to a flutter, with America's most experimental designers like Virgil Abloh and Heron Preston ditching the gritty Big Apple in favor of the more pomp displays in Paris and Milan.

Last season, the Council of Fashion Designers of America (CFDA) ushered in new changes including cutting the week down to five days. This season, in a surprising twist, CFDA Chairman and "Mr. New York," Tom Ford (the man responsible for boiling the event down to just 5 days) traded in his Manhattan-centric show for a celeb-packed spectacle in Los Angeles that produced a hoard of swoon-worthy chainmail and velvet gowns.

The event coincided with Oscars weekend and underscored a growing tension for American designers. Do they bolster their bottom lines by meeting their core customers where they're physically at? Or do they head to New York twice a year to stay in sync with their contemporaries?

The return of glam

A model walks the runway during the Christopher John Rogers Ready to Wear Fall/Winter 2020-2021 fashion show on February 08, 2020 in New York City.

Over the last few seasons, womenswear designers shifted away from old-school notions of glam in an effort to support conversations around the #MeToo movement, the nationwide Women's March rallies and female empowerment in general. That yielded an era of minimally tailored frocks a la Alexander Wang (another notable absence from this week's calendar). But this year, New York designers decided to dial up the glam once again.

"I don't think that wearing hot pink and ruffles or bright yellow, or an intense blue in shapes that take up space make you any less intelligent," John Rogers told NPR before the show. "I don't think that the way that you dress should make you sacrifice your personality or your point of view, or necessarily say anything about your intelligence."

Beckett Fogg and Piotrek Panszczyk of Area traded in last season's metal cage dresses and tendrilled bodysuits for an outer space take on glam that included braided crystal tops and heart-shaped dresses in shades of silver and Cinderella blue.

All about the stream

Social media has made Fashion Week more open to the public, by broadcasting shows live across platforms like Instagram and YouTube.At the same time, the thirst for clicks has filled front rows with influencers rather than tastemakers, which has made some shows feel as if they were designed for the web.

So was the case with Helmut Lang, as captured by photographer Sunil Gupta, who opted for a downtown-inspired gallery exhibit with models strewn about. The experience was arguably more immersive online than in person. The same can be said of CFDA/Vogue Fashion Fund 2019 Finalist Hillary Taymour who crammed the audience for her brand Collina Strada into a dark basement-level venue, featuring a grass-covered runway in an effort to drive home her message of sustainability.

A model walks the runway for Tia Adeola fashion show during New York Fashion Week at Spring Studios on February 07, 2020.

Diversity continues to be a hot button issue within fashion. While people of color are becoming more visible in front of the camera, there is still notable stagnation, and a lack of representation behind the scenes.

But in a positive move, NYFW not only saw more African Americans on the calendar but also talent from Africa presenting their designs.

British-Nigerian Teen Vogue Next Generation Designer Tia Adeola dropped her former moniker Slashed by Tia in favor of her own name and presented a collection inspired by the Renaissance and her Nigerian upbringing The collection featured organza tops, sheer feathered-draped jumpsuits and dresses, and a show-stopping blue dress featuring a deep open neck and deep back, embellished with her signature ruffles .

This season's designers dreamed up colorful, multi-textured suiting in a range of eye-popping colors and textures.

Michael Kors went for a more Town and Country approach with models including Kaia Gerber and Bella Hadid in suede riding boots and capes. They walked across rough wooden planks as Canadian country singer Orville Peck sang in a "Lone Ranger" mask. Heavy on the pleats, and with a notable lack of high, statement heels, the show nodded to New Yorkers' careful dance with comfort and luxury .

Ever the showman, and always the last to present, Marc Jacobs returned to the Park Avenue Armory with a spectacle critics have dubbed "Post-Instagram." Dancer and choreographer Karole Armitage kicked off the show under a single spotlight. Theartist, once christened the "Punk Ballerina" in the 1980s, slipped into the darkness before being met by an army of dancers in shirts and bras dressed by the designer.

The backdrop performance and a surprise final walk by Miley Cyrus, had everyone talking and helped affirm that New York is still a fashion capital capable of delivering power and pageantry.