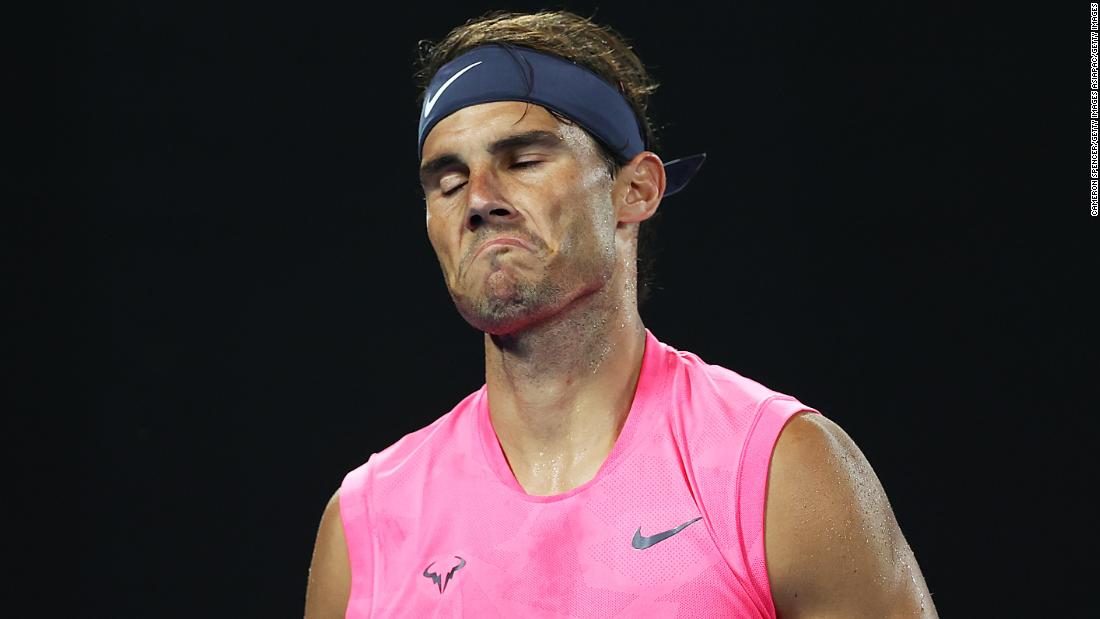 Rafael Nadal crashes out of Australian Open against Dominic Thiem

(CNN)World No. 1 Rafael Nadal's quest for a 20th grand slam title to equal Roger Federer is on hold after he lost to Austrian Dominic Thiem in the quarter finals of the Australian Open.

The Spaniard succumbed 7-6 7-6 4-6 7-6 (8-6) to the fifth seed Wednesday to become the first member of the "big three" to slip up in Melbourne after Federer and Novak Djokovic set up a meeting in the final four Tuesday.

Thiem, appearing in his first Australian Open quarterfinal, edged the brutal encounter with a powerful array of groundstrokes on Rod Laver Arena.

The 26-year-old will meet Alexander Zverev in the semifinal, a youthful match up compared with that of Swiss great Federer and Djokovic, who have a combined 13 Australian Open titles between them.

Thiem was serving for the match at 5-4 in the fourth set, only for Nadal to break back. It went to a tie break where, after squandering two match points, the Austrian finally triumphed.

"It came to 5-4 and it was a special situation for me, serving for the match against Rafa for my first semifinals here at the Australian Open," said Thiem.

"[It was] such a mentally tough situation. I couldn't handle it but I turned it around again in the tie breaker."

The fifth seed, who is chasing a first grand slam title, added: "It's a little bit demons in the head.

"Everybody has it, and I was just rushing way too much, changing a little bit the tactics from all the match, and that was wrong."

Nadal went a break up in the first two sets but wasn't able to capitalize on either as Thiem broke back on both occasions to force a tie break, which he won both times.

The match could have swung either way, with both players having won 102 points apiece after Nadal had claimed the third set.

But Thiem held his nerve to secure his first hardcourt victory over the Spaniard after losing to him in the last two French Open finals.

"I don't give up one moment during the match," Nadal told a news conference.

"I gave myself an opportunity until the last moment, so I'm happy for that, because my level of concentration and tennis was better I think. My tennis was not bad at all -- it was difficult to play against him."

Nadal must now wait until the French Open, which begins on May 24 in Paris, to try to match Federer's men's record of 20 grand slam titles. Nadal has won an unprecedented 12 titles at Roland Garros.

The 22-year-old has been beaten twice in the quarterfinals and three times in the fourth round at majors, but bounced back from a disappointing opening set on Wednesday to finally make that last four breakthrough.

He also becomes the first German in 10 years to reach a grand slam semifinal.

"I'm happy to be in the semifinals. Stan played a great match, a great tournament beating Daniil Medvedev last match in five sets.

"I honestly don't know what to say ... you guys (the crowd) cannot imagine what this means to me and I hope this will be the first of many."

After the match, Zverev doubled down on his pledge to donate all the $2.7 million (4.1 million AUD) prize money to Australia's bushfire relief fund if he wins the tournament.

Wawrinka, an Australian Open champion in 2014, broke Zverev twice in the first set to race into an early 5-0 lead before taking the first set off the No. 7 seed.

The German rallied to take the second set, where he didn't drop a point on serve.

Both players broke each other at the start of the third, but a Zverev break at 2-2 shifted the game's momentum.

He closed out the fourth set after two early breaks, ending the match with an 80% success rate on his first serve and 13 aces.

Meanwhile Simona Halep and Garbine Muguruza will meet in the semifinals of the women's draw after respective victories over Anett Kontaveit and Anastasia Pavlyuchenkova.

Halep, who won at Wimbledon last year and at the French Open in 2018, is bidding to win her first title in Melbourne.

She cruised past Estonia's Kontaveit 6-1 6-1 in just 53 minutes, maintaining her record of not dropping a set in the tournament.

"I felt great today on court," said world No. 3 Halep.

"I feel my game, I feel strong on my legs and I knew how to play against her. I've just been focused on every game I played, and I really enjoy playing here in Melbourne."

Muguruza had to work harder for a berth in the final four, defeating Pavlyuchenkova 7-5 6-3 despite the Russian going a break up in both sets.

Having arrived in Melbourne unseeded, two-time grand slam champion Muguruza admitted that patience has been key to her run at the Australian Open, a tournament where she had never previously progressed past the quarterfinals.

"The toughest moment is when you work hard, work like before or even harder, and you don't feel like results are coming fast," she told reporters.

"I think the tricky part for us is that athletes sometimes can get a little desperate and get too impatient about it.

"It's very tough to be for so many years at the top of the game and being that consistent. It's something super hard to do, very few players can hold that for many, many years in a row."